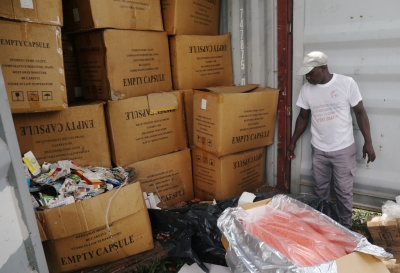 An agent stands next to a container full of illegal and counterfeit drugs seized by Ivorian authorities in Abidjan, Ivory Coast

Counterfeit pharmaceuticals pose a considerable threat to human health and wellbeing worldwide. "Counterfeit" refers to falsified, substandard, and unregistered/unlicensed medicines, and the use of these medications often provokes serious complications and, in many cases, premature death. The inconsistent quality of counterfeits also contributes to increasing drug resistance, especially to chronic infectious diseases such as malaria, tuberculosis, and HIV.

Despite its global nature, the counterfeit pharmaceutical trade does not affect all parts of the world equally — the poorest, most vulnerable populations suffer the most. While wealthier countries offer a more lucrative market, they also have advanced technologies and regulatory bodies in place to combat counterfeits. In contrast, the poorest third of WHO member states, most of which are found in sub-Saharan Africa, have either no means or very limited means to combat counterfeit medicines.

As far as technology has come in recent decades in the anti-counterfeiting domain, there still remain significant technological gaps. Very little technology in this realm has made its way to the consumer, leaving the consumer with little to no awareness of the gravity of the problem or of alternatives they have for sourcing legitimate medicines.

The project team is developing a prototype mobile phone application that places more power in the hands of the consumer. This application allows patients to identify local pharmacies with specific medications needed while also displaying each pharmacy's rating. Ratings are based on what percentage of medicines in stock have been verified by a third party (e.g., Sproxil, mPedigree, or law enforcement). Pharmacies are given anywhere between one and three stars — one being the lowest, three being the highest. One star indicates that fewer than 50% of medicines have been verified by an external source; two stars, between 50% and 85%; three stars, more than 85%. Once patients choose a pharmacy — ideally a pharmacy that has both the medicine(s) needed and a high rating — the patient uses another feature within the same application to verify the drug at the point of sale using the 2D barcode. Immediately upon inputting the code, the app displays if that particular drug was verified, by whom, and the expiration date.

The project will collaborate with NAFDAC, the National Agency for Food and Drug Administration and Control in Nigeria. NAFDAC currently requires drugs that have been authorized by appropriate regulatory bodies to carry a registration number. As such, pharmacies in Nigeria would be given their star ratings based on what percentage of medicines in stock have been registered with NAFDAC. The team will also utilize Esri's Africa GeoPortal to leverage their extensive African-focused geospatial data.