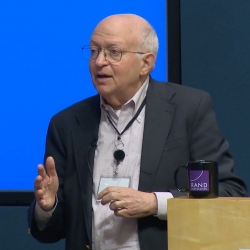 Dr. Martin Feldstein, former distinguished visiting faculty member at the Pardee RAND Graduate School, passed away on June 11, 2019. He was 79. Feldstein served as the George F. Baker Professor of Economics at Harvard University and president emeritus of the National Bureau of Economic Research (NBER), a private, nonprofit research organization specializing in producing nonpartisan studies of the American economy.

From 1982 through 1984, Dr. Feldstein was Chairman of the Council of Economic Advisers, and served as president of the American Economic Association in 2004. He served as an advisor for three U.S. presidents, serving as President Reagan's chief economic adviser from 1982 to 1982, as a member of the President's Foreign Intelligence Advisory Board under President Bush in 2006, and as a member of President Obama's Economic Recovery Advisory Board in 2009.

He served as a distinguished visiting faculty member at Pardee RAND in 2016 and 2017, during which he engaged with students, faculty, and RAND research staff. In 2017, he delivered a memorable talk on “The Shape of U.S. Tax Reform” to a RAND group. Even more impressive was the roundtable lunch he held for students. During the lunch, he went around the table asking each student in turn about their dissertation. In each and every case, across a wide variety of policy topics, he gave a recommendation on a book to read, an expert to consult, or in many cases, asked them to send him something they’d written for him to read and comment on. He was truly a great scholar and mentor and will be deeply missed by all.