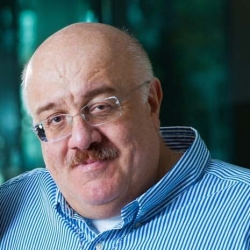 Kakha Bendukidze, a businessman, political reformer and statesman in the nation of Georgia, and a member of the Board of Governors of the Pardee RAND Graduate School, passed away on November 13, 2014. He was 58.

“We are deeply saddened and send our condolences to the family of this esteemed member of the Pardee RAND community,” said Susan L. Marquis, Dean of the graduate school. “Kakha was a generous, brilliant, forward-thinker whose excellent counsel, good humor, and wide-ranging insights about our world and how it can be made better will be sorely missed.”

Bendukidze was trained as a biologist but became a businessman, amassing his fortune in Russia in the 1990s and serving at one point as general director of OMZ Gruppa Uralmash-Izhora, Russia’s biggest producer of heavy machinery.

"He first became connected to RAND through his role as a founding member of the Russian-America Business Leaders Forum (what we now call the RAND Business Leaders Forum) organized by [the late Pardee RAND professor] Jeremy Azrael," notes Professor Richard Neu. "The first meeting of the Forum, which Kakha attended, was in Moscow in October 1997. "He was a favorite at Forum meetings, offering extended interventions couched in humorous terms but always with a serious underlying message," Neu added. "As he warmed to his subject, his enthusiasm would take hold and his words came in a torrent. This, coupled with his heavily Georgian-accented Russian and his love of metaphors, posed a severe challenge for even the most accomplished simultaneous interpreters. Jeremy Azrael would regularly beg Kakha to slow down so that the interpreters could catch up."

Bendukidze returned to his beloved native land in 2003 after Georgia’s popular “Rose Revolution” swept the government of Mikheil Saakashvili to power. Bendukidze was named economics minister, held various government posts, and earned a reputation as liberal reformer and opponent of governmental graft and corruption.

After leaving government service in 2009, he turned to education, founding and investing in the Free University of Tblisi and the Agricultural University of Georgia and building them into respected institutions.

In May, he was appointed adviser on reform efforts to Ukrainian president Petro Poroshenko.

Neu said, "Kakha was truly a larger-than-life figure—in his intellect, his passion for reformist policies, and his physical size."

A man of many notable accomplishments, Bendukidze helped to connect aspiring public policy candidates from the former Soviet republics with Pardee RAND, the largest public policy Ph.D. program in the United States and the only program based at an independent public policy research organization — the RAND Corporation. The graduate school, with doctoral candidates from more than two dozen nations, has a steady stream of quality applicants from Georgia, Ukraine, Azerbaijan, Uzbekistan, and Russia.

Bendukidze also was a generous supporter of a scholarship in memory of Azrael, a top expert on the Russian economy and a longtime political scientist at RAND. That scholarship supports study at Pardee RAND by Ph.D. aspirants from former Soviet republics.