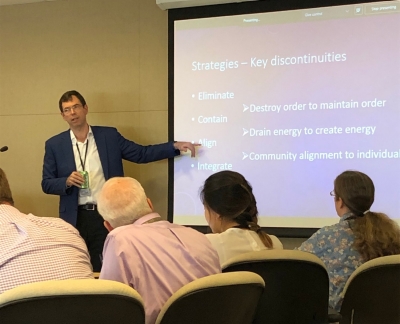 During his residency, he offered a lecture series to Pardee RAND students and faculty, with brown-bag lunches on the following topics:

For each talk, he offered readings to prepare attendees for the conversations that followed.

He also offered talks to RAND researchers toward the end of his residency. He discussed "Climate change and carbon prices: What interventions are investors willing to fund?" with researchers in the Community Health and Environmental Policy program of RAND's Social and Economic Well-being division; "Econometrics, modeling and credibility" with RAND's Economics, Sociology, and Statistics Department; and “What can policy researchers learn from analytics in the finance world?” for researchers working with the Center for Scalable Computing and Analysis.

Strongin was also an active participant in Career Services' inaugural Student Research Showcase, providing excellent feedback to the many students who participated.

At Goldman, Strongin is a member of the company's Management Committee and its Firmwide Client and Business Standards Committee, and co-chair of the Firmwide Technology Risk Committee. Previously, he served as global head of strategy research and co-chief operating officer of Global Investment Research, as well as global head of commodities research. He joined Goldman Sachs in 1994 and was named managing director in 1998 and partner in 2002.

Prior to joining Goldman, he spent 12 years at the Federal Reserve Bank of Chicago, most recently as the director of Monetary Policy Research. Before that, he was an economist at the Center for the Study of Economy and State at the University of Chicago and a researcher at PanHeuristics, a think tank focused on military strategy and energy policy.

He has published in numerous academic journals in finance, macroeconomics, risk management, industrial organization and econometrics. He has also published extensively in energy, banking and labor policy.