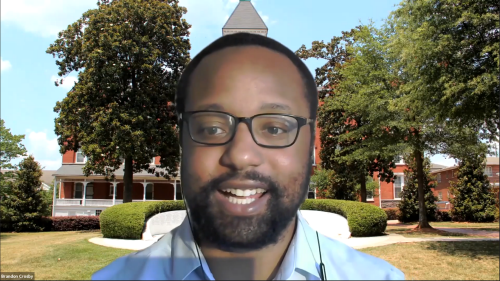 Prof. Brandon Crosby, with a background image from Morehouse College, talks to attendees via Zoom

The projects included a workshop on the modern racial justice movement, a workshop on understanding the case for reparations through an examination of black household wealth and income, a program to build "virtual bridges" by increasing networking and collaboration across RAND and Pardee RAND programs, an effort to lay the groundwork to address COVID-19 disparities in South Los Angeles, and a commentary on racial matters.

Given travel challenges, and in lieu of a week-long program, Pardee RAND invited the nearly Faculty Leaders Program alumni to reunite via two dynamic workshops designed to reenergize their commitment to integrating policy analysis in their classrooms.

The first workshop, taught by Prof. Jeffrey Wasserman, built upon the material that was covered in the attendees' original weeklong Faculty Leaders Program, using our current context as a jumping off point. The second, taught by Faculty Leader alumna Jameta Barlow (cohort ’16), introduced “disruptive policy analysis pedagogy” and shared techniques to enhance the “informal syllabus” of attendees classrooms.

The two workshops were also designed to deepen alumni connections with each other, help them continue to build on their policy skills and knowledge, and learn new techniques to teach policy analysis.

Networking with Morehouse and the Atlanta University Consortium

To help college students interested in social justice issues learn how they can have a lasting, impactful policy, Pardee RAND leaders offered a virtual workshop on October 8 that attracted more than 80 attendees.

Titled From Social Justice Activism to Shaping Policy, the event arose from a simple question posed by Pardee RAND professor Brandon Crosby during the open discussion with Morehouse College president David Thomas in June. Specifically, Crosby asked, how could RAND and Pardee RAND develop a closer and more supportive relationship with historically black colleges and universities (HBCUs) like his own alma mater, Morehouse?

Stefanie Howard, Pardee RAND’s assistant dean for admissions and strategic initiatives, brainstormed ideas with Crosby and an internal champion at Morehouse, Dr. Sinead Younge. They decided the event should highlight the work that goes on at research institutes to change policy, and offer next steps to those inspired by social justice activism, who might not otherwise be aware of policy analysis as a career option.

“We are hoping for this to be the beginning of a longer relationship for Pardee RAND with Morehouse and the larger Atlanta University Consortium,” Howard said.