Course Examines How to Engage Communities in Research 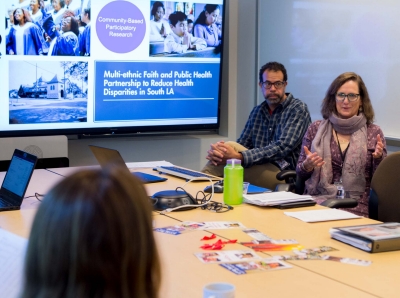 Malcolm Williams was a guest lecturer in Kathryn Derose and Laura Bogart's course.

In many research fields, involving community members not only improves the quality of the research but also can increase its ability to result in local change and policy action. A new course this winter is helping students acquire the skills to conduct this research.

In preparation for the launch of the "Policy in Action" curriculum stream, Pardee RAND's deans asked professors Laura Bogart and Kathryn Derose — experts in conducting community-partnered research — to develop and offer Engaging Communities in Research.

Derose said they developed the syllabus in part based on their experiences but, like all good academics, they did additional research.

"We also looked at what other universities and professors have done in similar courses," Derose said. "Also, both Laura and I have done mostly health-related research, so we expanded our search of the literature to include other policy areas like education and urban planning."

Bogart added, "We stepped back and thought about the basic knowledge someone needs to know before getting started with a community project."

She continued, "A major theme throughout the course was how to conduct research in communities in which one is perceived as an outsider who does not share similar characteristics with community stakeholders. We discussed with students how to navigate such situations with cultural humility, showing community members that they are valued as experts on their community context as much as researchers may be experts on how to do research."

The course included presentations from, and Q&A sessions with, RAND researchers and community partners who do community-based participatory research. The guest lecturers included RAND researchers Malcolm Williams, Peter Mendel, and Dmitry Khodyakov. David Pantalone from the University of Massachusetts at Boston, Cedric Farmer from the Los Angeles Metropolitan Churches, and the Rev. Michael Mata from Azusa Pacific Seminary also visited the class and shared their expertise.

Student Graham Andrews (cohort '17) said he signed up for the course "because it dovetails nicely with my desired career path — consulting. That might seem odd, but really it's applying the same tools to a different customer or client base."

Andrews came to Pardee RAND with a software engineering background, but his dissertation is focusing on organizational decisionmaking around risk. He said this course was a terrific segue.

"This was a great, experiential class. We defined our own scope and projects. I reached out to a member of the L.A. City Council who's active in retrofitting buildings for earthquakes. A lot of communities haven't taken an active position, because it's expensive," he said. "You have to understand the community dynamics around an issue and build rapport with the the community to understand what's important. This class has helped me learn how to conduct research that will be useful to achieve mutual goals."

Derose said she also learned some things from the course: "I used the opportunity to expand into new areas such as experience-based co-design and evaluating the community engagement process itself."

Bogart said she's enjoyed the course and is looking forward to teaching it in the future. "Class discussions have been dynamic and interesting," she said. "The students ask excellent, thoughtful questions."

Andrews said he really appreciated the interactive nature of the class, and the guest lectures. "The school deserves credit for allowing the teachers to offer a small, hands-on class, and the professors deserve a lot of credit for making it the class it is," he said. "From my experience, guest lectures are the sign of a really successful class. When a guest lecturer comes in who works on the topic, that's a day I know I need to sit up and take notice. I learned so much."

As for what might change in future years, Bogart noted, "If we were able to know the types of students who are taking the class earlier, we could set up community speakers or community organization visits that would be a good match for the students. We could also tailor our lectures around students’ interests."

Derose added that she's excited for the school's efforts to expand community-based research. "Having on-going relationships between the school and a variety of community organizations across policy areas will facilitate students being able to connect more efficiently."

Andrews agreed. "It takes professors who have the connections and are willing to do the legwork, which definitely happened in this course. I hope they don't make changes, except ensuring it scales up to serve more students," he said.