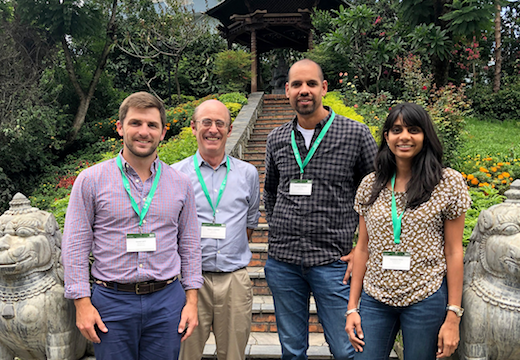 This was the students' first time participating in an IPCC event. "I was really impressed by how well coordinated everything was," Patel said. "Especially when you realize how many scientists were there, from all over the world. They were so conscientious about diversity and representation — very forward thinking."

The meeting included more than 260 expert authors and chapter scientists from 60 countries who are working on the IPCC's Sixth Assessment Report, which is scheduled for release in 2021. Lempert and Preston were co-chairs of the author teams for two of the report’s 18 chapters, while Catt and Patel supported the teams as chapter scientists.

Catt added, "It was a fascinating process to take part in and certainly a bit intimidating at first, because of the caliber and seniority of people attending and the specialized IPCC language that has developed to describe various aspects of the report process."

The IPCC brings researchers together to assess the scientific literature on climate change, possible response options, and the natural, political, and economic impacts and risks. Working Group II’s specialty is examining the vulnerabilities of human and natural systems to climate change, as well as how these systems adapt. 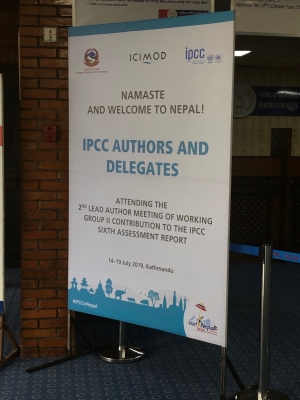 Patel has been working with Lempert since the spring on the first chapter, an introduction to climate change adaptation. Preston is the lead author of the final chapter, which sets the stage for climate development pathways. Catt is supporting Preston and also working on a cross-chapter paper.

Catt described the event as "one big coordination show of chapter meetings, breakout groups, and large plenary meetings. You have 18 chapters and 7 cross chapters all with overlapping content, so there is a lot of discussion about what goes where and how to make sure the entire report is coherent."

Catt's cross-chapter paper is titled "Cities and Settlements by the Sea." Cross chapters sit outside of the main report structure and focus on a particular region or type of area that warrants greater specialized content due to its importance or unique vulnerability to climate change.

"Coastal areas have an outsized importance to humanity as the regions where a large chunk of the population resides," Catt said. "They're where megacities are usually located, and where trade flows through. Yet, these regions also are uniquely vulnerable to multiple climate risks like sea level rise, extreme heat and precipitation, and drought, potentially with all of those compounding at the same time."

Patel said she has really appreciated the chance to work with Lempert, and that the project is a terrific fit with her background. She previously worked as a contractor for the global climate change office of USAID and worked with the International Centre for Integrated Mountain Development (ICIMOD), the organization that cohosted this meeting.

"This has been a great opportunity as a Ph.D. student to see how these reports get put together. Also, Rob [Lempert] has encouraged me to do a lot of writing and research," she said. "It's provided me with an interesting perspective to help me think about my own dissertation, which will probably relate to urbanization and climate change in developing countries."

Funding through the Cazier Initiative for Energy and Environmental Sustainability supported Catt and Patel's participation, which also counts as part of their On the Job Training (OJT).

Given the distance they traveled, Catt and Patel made sure the trip wasn't all work, and they were able to see the Himalayas — a bit. 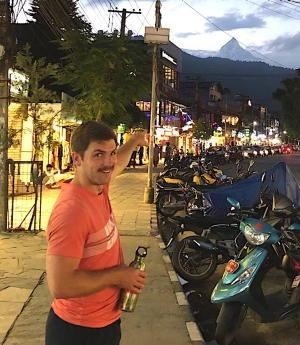 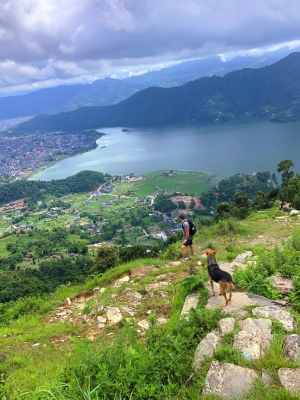 "It was an unfortunate time to visit," Catt said, "because the clouds obscure the mountain vistas much of the time".

"The monsoon season endures for all of June through August," he explained, "so we were squarely in the middle of it in July. After the first few days, I wondered if we were ever going to see the sun while in Nepal, but the clouds did part and it was less rainy towards the end of the trip."

Indeed, meeting attendees experienced climate change firsthand as a late monsoon drenched Kathmandu, with a month’s worth of rain falling in 24 hours, closing the local airport.

Patel said she found the rain to be refreshing. "This was my second time in Nepal, but I hadn't been there during monsoon season," she said. "The weather gave Kathmandu a terrific character, not least because it encouraged me to stop and admire the streets during the downpours."

Her previous trip to Nepal was also work-related, when she visited ICIMOD for a global project funded by USAID and NASA to incorporate climate science in geospatial decision making. She said she was happy show Catt some of the places she'd been before.

After the meeting ended, Catt said, they "explored all over Kathmandu and spent a half-day in Bhaktapur, an ancient city east of Kathmandu with lots of temples and unique architecture. That was probably the deepest cultural immersion I had."

Patel said it was sobering to see so much construction in the city; her last visit had been prior to the magnitude 7.8 earthquake that hit the region in 2015.

"It was a much cleaner, quieter and nicer city, as it was on a beautiful lake in a mountain valley," Catt said. Patel said they took lots of yoga classes and enjoyed the chance to relax.

Catt added, "One class unexpectedly turned into a 20 minute sound bath at the end, complete with gongs, sound bowls, and a thunderstorm outside. In a zen-like state, we had tea with our yogi afterwards on the patio as the clouds parted and several 20,000-plus-foot snow-capped peaks emerged from the clouds."