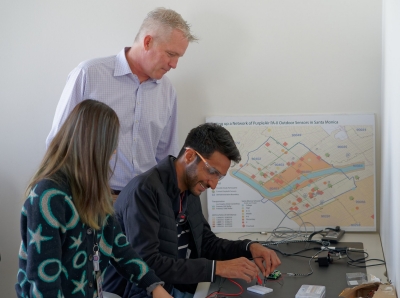 A Tech and Narrative Lab (TNL) project, funded by the Cazier Initiative, has brought together a team of Pardee RAND students, faculty, and RAND staff to try to answer those questions.

In their efforts to answer the questions, the team has researched the benefits and challenges to using commercially available low-cost air-quality sensors, developed a multi-year research plan, purchased a few dozen monitors, recruited a team of RAND citizen scientists to deploy them at their homes, and begun analyzing the data. They've also conducted hands-on TNL investigations into whether they can create lower-cost sensors, with the goal of making them available in developing countries. 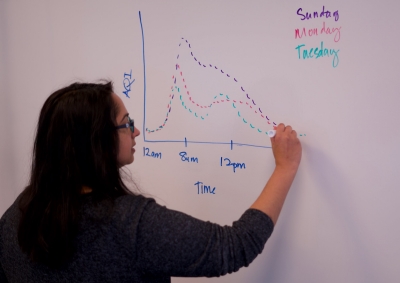 Currently, U.S. government agencies communicate air quality based on data from monitoring stations equipped with high-accuracy instruments that meet federal monitoring requirements. However, due to their high costs and maintenance requirements, these stations are few and far between—for example, there is only one federal air monitoring unit in all of Los Angeles County—which means the data may not accurately represent the pollutant gradients at the neighborhood level.

Baxi added, "If the quality of the measurements can be improved, sensors could become a game changer in monitoring air pollution, traffic management, personal exposure, and health assessment, particularly in the budget-constrained developing world."

Thomas said having this data could be extremely helpful for policymakers: "Everyone needs to breathe. And air quality is often poorer in less affluent neighborhoods. By making this data available, and developing even lower-cost air quality sensors, we can democratize the policy process. Our hope is that local and state policymakers will be able to use this data to invest resources and develop better and more targeted policies for reducing air pollution."

Chen said, "We met with leading sensor manufacturers and scientists leading air quality studies, and learned about the state of the art in sensing technologies, data sharing and harmonization efforts, market trends, and future directions in low-cost sensing technologies."

They then developed a research plan and recruited RAND staff members to participate as citizen scientists. 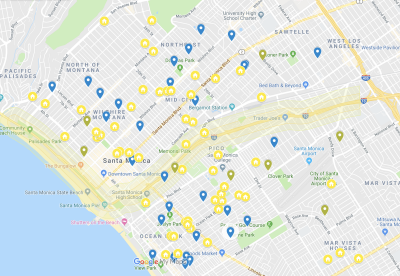 The data collection began in early November 2018. After attending the Air Sensors conference, the team decided to use PurpleAir's $200 air-quality monitors for the pilot. They deployed 21 sensors throughout Santa Monica, at the homes of RAND researchers and Pardee RAND fellows who volunteered for the pilot study.

They were just in time to gather data and discover correlations between deteriorating air quality in Santa Monica and some of the worst wildfires the region has experienced in recent years.

The data gathered from the team’s network of sensors was much more granular than the data from AirNow, EPA’s official repository of air quality data.

The team also looked at average hourly data by ZIP code in Santa Monica. In November, 2018, the air quality in 90401 and 90405 appeared to be better than in other parts of the city. With more data, people will be able to make location-based decisions based on real-time air quality information.

Thomas said access to this hyperlocal and time-sensitive data could be useful in numerous policy situations. For example, schools could recommend students engage in outdoor activities during certain hours that have better air quality, school districts and cities could accelerate their move to electric buses and other vehicles, and much more. 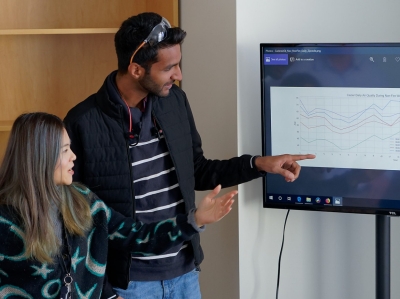 Two follow-on activities include expanding the pilot to Pittsburgh, and investigating whether less-expensive tools could be developed.

Despite having improved air quality since its industrial peak, Pittsburgh continues to experience poor air quality based on high levels of particulate matter and other pollutants. The city also features socioeconomically diverse neighborhoods and topographical variety, with numerous hills and valleys that could affect air quality levels. For these reasons, the team recently recruited two dozen RAND staff in the Pittsburgh Office to extend the pilot.

The students are also working in the TNL to develop low-cost, do-it-yourself sensors using the same components as the $200 PurpleAir sensors deployed in Santa Monica and Pittsburgh.

Awan explained, "We soldered Plantower Particulate Matter sensing elements, programmed a Raspberry PI unit to serve as CPU, assembled temperature and humidity sensors, and connected the kit with a standalone solar powered voltage source. The unit cost for each DIY sensor has come out to be $35 for a prototype."

Once they have enough DIY units, the team will deploy them and compare their performance against the PurpleAir sensors. The team is considering involving both Pardee RAND students and students from Santa Monica schools to assist them in the manufacturing effort.

Chen explained, "As we gather data ourselves and obtain open-source data like satellite maps, traffic and topological data, we also hope to compare machine-learning based forecasting models with traditional forecasting methodologies."

The team is hopeful that combining technological innovations with local collaboration can create lasting solutions for individual behavioral change and policy improvements.