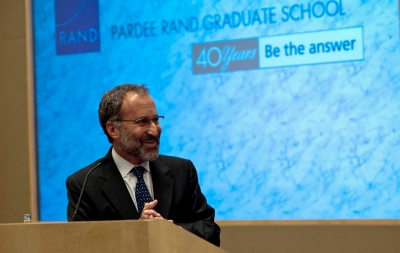 In recognition of the 50th anniversary of RAND's Ph.D. program, Pardee RAND Graduate School has convened a task force of alumni and staff to plan commemorative events and more throughout 2020. Alum Jeffrey Wasserman (cohort '85) graciously agreed to be the chair.

Dean Susan Marquis, in welcoming and introducing the task force members, said, "The role of the Task Force is to develop ideas and recommendations for how we should mark and celebrate the school’s 50th Anniversary in 2020, and then to be our sounding board as we move forward."

The largest events will be planned for Commencement Weekend, June 11–13, and the kickoff of the school's development campaign on March 7.

The task force will also suggest and review nominations for the fifth biennial Alumni Leadership Award, which Dean Marquis will present at commencement, and encourage attendance at anniversary events.

Alumni members of the task force (by cohort year) are:

Marquis has asked the group to brainstorm and help to plan additional activities and outreach, including but not limited to: