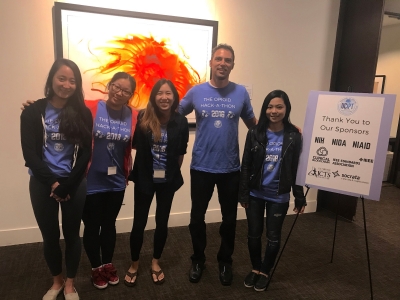 Sometimes described as "invention festivals," hackathons are multi-day events in which people collaborate intensively in an effort to solve a specific problem. Many hackathons involve technology — the word being a portmanteau of "hack" and "marathon" — but teams also include designers, subject-matter experts, and others. With the launch of the Tech and Narrative Lab (TNL), Pardee RAND has taken a leap into this area by hosting its own internal events and encouraging student participation in regional competitions.

During one intense weekend in October, they used applications of machine learning to develop new ways to predict opioid overdose deaths in California.

None of the four had ever participated in a hackathon, and they had entered the most popular and challenging track available, yet they returned to school the following Monday with a $5,000 prize ... and plans to continue their work, of course. 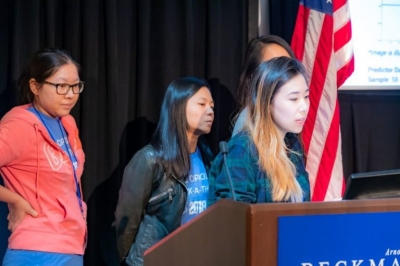 Their reasons for entering the contest varied. Park is currently working on opioid-related research, so her goal “was to find out what data is available and what others think about this issue."

Chen's reason for entering the competition was somewhat different. "I am very enthusiastic about data science, especially machine learning, and its applications in health-related issues," she said. "I mainly saw the hackathon as a learning opportunity and wanted to experience working on something very fast-paced and applied."

The team was provided with various data sources related to opioid outcomes in California and had 24 hours to develop visualizations to address one of four aspects of the topic, with a final panel of judges deciding the winners.

As the sponsor, HHS said it was "seeking data-based tools/visualizations/models that could help track trends on or help (1) decrease opioid prescribing among providers, (2) increase willingness to prescribe or use medication-assisted therapy, and/or (3) increase harm-reduction." The team focused on increasing harm reduction. 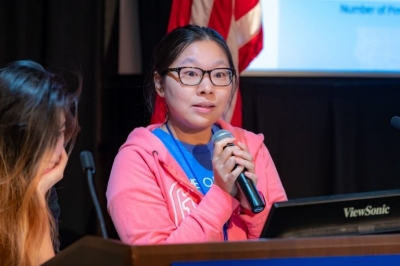 Sujeong Park talks about the data

Karen Lee summarized their work: "We built a predictive model of opioid overdose deaths in California at the county level, identified key risk factors for the next opioid crisis, and visualized predicted and actual outcomes and risk factors in an interactive county-level map. We hope that this tool could be used by policymakers at the state level to identify and track high-risk areas and target interventions at the local level." (A video of their presentation is available online.)

They considered 130+ potential predictors of California opioid overdose deaths in 2017 within the categories of supply, demand, demographic information and socioeconomic conditions, health information, and treatment availability. They then conducted an exploratory analysis to see which variables were significantly correlated with opioid overdose deaths, ran several regression models, and ultimately used a forest regression.

The team's machine learning–based algorithm was able to predict opioid overdose deaths in 80 percent of California's counties within ±10 fatalities.

UCIPT's goal for the hackathon is for the four winning teams to have their solutions implemented within the public health system to help address the opioid crisis. Along with their prize money, the teams will also receive support for further development of their programs. 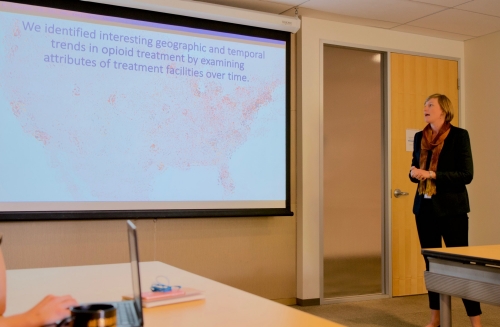 Less than a week after the Opioid Hackathon, the four students were back at it, this time as part of the TNL competition focused on improving opioid treatment.

Advised by alum Bradley Stein ('97) and RAND researcher Gavin Hartnett, they and fellow student Nima Shahidinia ('16) constituted one of the three teams in the TNL event.

The teams explored a novel longitudinal data set on opioid treatment facilities in the continental United States and used a combination of data science and visualization capabilities to better understand and potentially improve access to substance abuse treatment.

The competition task was two-fold: first, to extract trends from the data set (and any available secondary data sources) that offer new insights on the current opioid epidemic, and second, to design and implement matching algorithms that can recommend appropriate facilities to a patient in need.

TNL teams also shared their results at a brown-bag talk 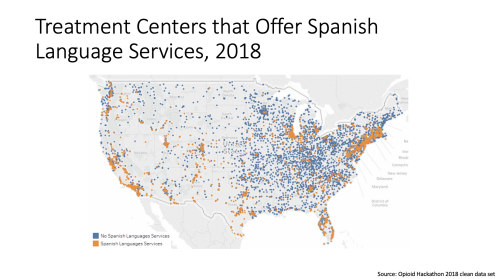 TNL director Todd Richmond explained, "The data is the result of a significant effort by RAND researchers and RAND Information Services to curate and parse unstructured historical data. This resulted in a few quirks that teams had to address, such as survey fields and reported service codes increasing over time and facilities occasionally missing a survey year."

In the first phase of the competition, participants focused on telling the opioid epidemic story with data. The teams developed visualizations and maps of available substance abuse service providers, making use of as much of the information in the data as possible to tell a story about the opioid epidemic.

In addition, teams were asked to consider — and identify or formulate — secondary data sources that would improve the quality and detail of their opioid narrative.

The second phase of the competition involved "intelligent facility matching" in which teams developed a model to match prospective substance abusers to treatment facilities.

Richmond explained, "Think of this as an 'Amazon recommends…' capability for treatment facilities. The models made use of any information that would affect the quality of service — for example, distance to facility, provider services available, provider capacity, and so forth."

Christine Chen said she appreciated the learning experience that the TNL competition offered, though it was much different than the other hackathon. "It was designed for us to learn, not to compete. It gave us more time and more freedom — there was less expectation or specific direction on what we should deliver," she said.

"But there was also less pressure — they didn't lock us up and ask us to deliver results in 24 hours," which she said had encouraged her team in the other event.

"Everyone won by just entering" the TNL event, she said, referring to the fact that all participants received coverage for their time.

The teams presented their findings at an informal brown-bag event and also to RAND's AI Study Circle in early December.